Kafiristan or Kafirstan is a historical region that covered present-day Nuristan Province located on the southern slopes of the Hindu Kush Mountains in the northeastern part of Afghanistan. The region was historically known as Kafiristan (meaning "Land of the kafirs") because of its inhabitants - the Nuristani, an ethnically distinctive people who practiced a form of ancient Hinduism.

The Kafirs are thought to be the old native population – the original inhabitants of the plains country of Afghanistan in what is now Nuristan (also spelled Nurestan or Nooristan). The surrounding area fell to Alexander the Great in 330 B.C; and folk legend suggests that the Nuristani people are descendants of Alexander (or the generals of his army). It later fell to Chandragupta Maurya; and the Mauryas introduced Buddhism to the region. The Kafirs were driven back into the mountain areas by the arrival of Islam in the country about 700AD; and they did not convert to Islam with the rest of the population; remaining pagan for several more centuries. They were largely independent until the late 19th century, when the region was attacked by the forces of Emir Abdur Rahman Khan and the population was forcibly converted to Islam.

Kafiristan was full of steep and wooded valleys. It was famous for its precise wood carvings, especially of cedar-wood pillars, carved doors, furniture such as dowry chests and horn chairs, and statuary. Despite many sites being torched and burned to the ground; some of these items survived, as they were reused in mosques, temples and shrines. 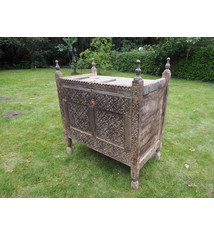